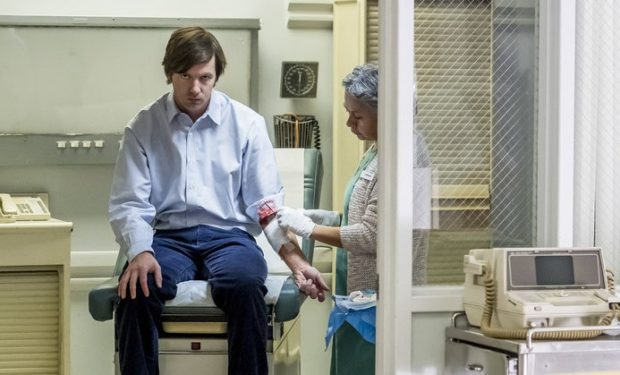 In the Timeless episode “The Day Reagan Was Shot,” the Time Team travels back to 1981 Washington, D.C., on the day President Ronald Reagan (Jefferson Black) was shot. Turns out the Sleeper’s target isn’t Reagan but young police officer, Agent Christopher (Karen David). The team must save Agent Christopher and keep her from making a big mistake. Without her, the Time Team wouldn’t exist.

[Check out Erik Stocklin as Sam Gray on Mistresses]

Reagan’s would-be assassin John Hinckley, Jr. is portrayed by Erik Stocklin. He’s known for his roles on Netflix’s Haters Back Off! with The Office‘s Angela Kinsey (Patrick, see photo below), Stalker (Perry Whitley), Bones (Noah Gummersall), Mistresses (Sam Grey), The Vampire Diaries (Stevie), and First Day (Gregg), among others. Stocklin will appear next on the big screen in the horror film Hollow Body with David Arquette and Luke Wilson. Timeless airs Sundays at 10pm on NBC.

What an epic dream. Extremely grateful to get to work with this cast. Beyond proud to be a part of this show. Overwhelmingly thankful and happy. Hope you all will watch and enjoy x