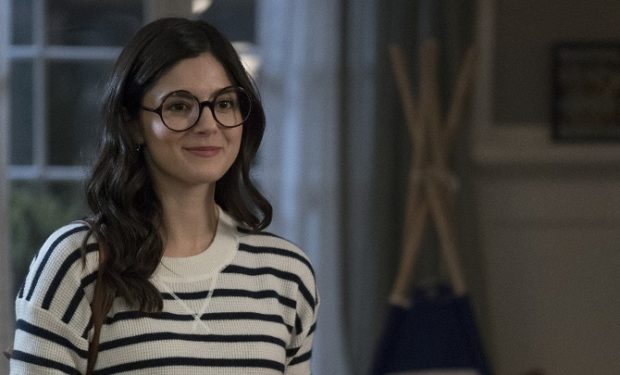 Monica Barbaro on Splitting Up Together (ABC/Richard Cartwright)

In the Splitting Up Together episode “Nevertheless… She Went Clubbing,” while Lena (Jenna Fischer) tries to set a good example for her kids, her estranged husband Martin (Oliver Hudson) starts to date Lisa Apple. Not only is Lisa adorable in those round eyeglasses but the kids love her too. The brunch scene she has with Martin is hilarious.

[Check out Monica Barbaro on UnREAL]

Lisa Apple is portrayed by actress Monica Barbaro. Barbaro is known for her roles on Chicago P.D. and Chicago Justice (Anna Valdez, see photo below), and Lifetime’s scripted series UnREAL (Yael), among others. Barbaro is currently filming the new series The Good Cop with Tony Danza and Josh Groban. Splitting Up Together airs Tuesdays at 9:30pm on ABC, right after black-ish, and right before For the People.

This was my first day shooting on the set of Chicago Justice. Apparently, I had a lot of questions for our incredible director, Fred Berner. Today at 5pm PST it’s your turn to ask questions!! Like why do I appear to be a foot taller than the director in this photo, or ‘hey who’s the redhead behind you?’ ?Hop on over to twitter and question away with the hashtag #AskBarbaro. See you in a bit! • And don’t forget to tune in to our new episode tonight at 9/8c on NBC! • PS: The stripes on Fred’s shirt dance when you scroll… #ormaybethatsjustmyphone