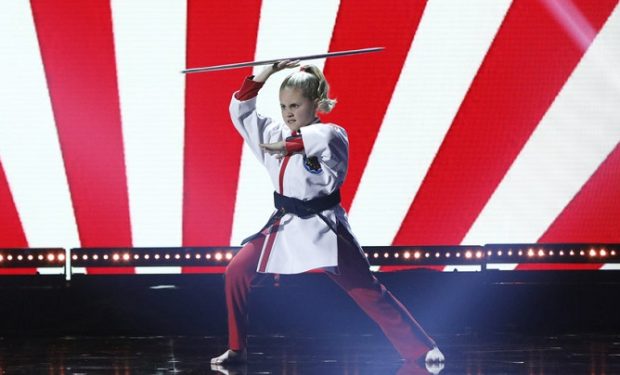 On the Little Big Shots episode “Tour de Harvey,” Steve Harvey meets a number of talented kids including two athletic 9-year-old girls. Ruby Isaac is a professional cyclist from the UK, and Channah Zeitung is a taekwondo champion.

[Diary of a Taekwondo Master is a funny children’s book]

When Channah demonstrates her skills on the Little Big Shots stage, she uses a long stick (known as a bo or an edit) like a master. And she yells a lot and loudly, which is encouraged in Taekwondo and other martial arts. Yelling (which must come from the belly not the throat) is believed to increase one’s power. It also helps to intimidate your opponent, and is known to reduce anxiety among other things. The yelling or (“K’ihap“) works for Channah — she delivers a fierce performance! Little Big Shots airs Sundays at 8pm on NBC.