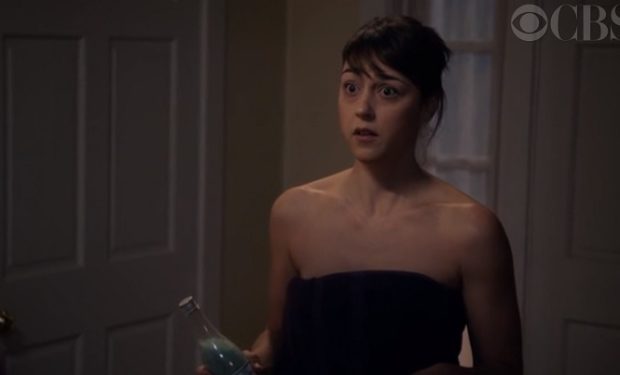 On the Life In Pieces episodes “Portrait Plagiarism Renter Scam,” while Jen (Zoe Lister-Jones) agrees to be paid by her artist client with an original painting, Tyler and Clementine rent out their tiny house to a young woman named Mavis. But they neglect to tell Heather (Betsy Brandt) and Tim (Dan Bakkedahl). So when Mavis comes into Heather and Tim’s house to use the soaking tub, they are alarmed… and then bemused.

Mavis is portrayed by Cyrina Fiallo. She’s known for her roles on Brooklyn Nine-Nine (Nikki), The Fosters (Gabby), RePlay (Sasha), We’re Not Alone (Carly), Disney Channel’s Good Luck Charlie (Vonnie), and the web series The Subpranos (Giovana Stratatelli), and My Alibi (Marley Carabello) which she co-directed, co-produced and co-starred with Chrissie Fit, among others. Fun fact: Fiallo is in the cover band The Girls with actresses Alison Brie (Community) and Julianna Guill (Girlfriends’ Guide to Divorce). Life in Pieces airs Thursdays at 9:30 pm on CBS, right after Mom and right before S.W.A.T. [Binge watch Life in Pieces whenever you want via CBS All-Access]