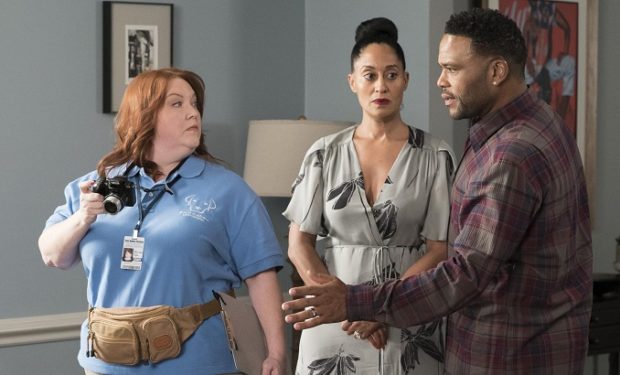 In the black-ish episode “Dog Eat Dog World,” Bow’s (Tracee Ellis Ross) brother Johan (Daveed Diggs) is back in town and he doesn’t receive a warm welcome from grandma Ruby (Jenifer Lewis). Meanwhile, the Johnson family can’t decide whether or not to get a dog even though Dre (Anthony Anderson) promised his son Jack (Miles Brown) he could get one after getting all As, which Jack does. A rescue dog placement coordinator comes to the house to take copious notes and photos.

The woman from the rescue dog center wearing the fanny-pack is portrayed by Dana Powell. Powell is best known for her roles on Modern Family (Cam’s sister Pam), and in the film Bridesmaids (as Kristen Wiig’s flight attendant). See gif below.

In Episode 46 a listener mentions Dana’s ‘ma’am’ moment in the movie Bridesmaids. We couldn’t find the exact gif (because who cares really) so here are a couple popular ones & another to celebrate we made it to FRIDAY!!!! #goodforus * * * * * * #imwatchingyou #sitdown #impoor #bridesmaids #itsfriday #instadaily #instagood #itunes #rate #review #subscribe #comedy #funny #listeners #podcasters #podcasting #podcast #absoluteworstpodcast

Here’s a teaser for our new episode of ‘I’m Still a Person: The Me Time Episode’!! Please go watch and share the full video!!! #linkinbio #ImStillAPerson @awestruck

A post shared by Absolute Worst Podcast (@absoluteworstpodcast) on Mar 1, 2018 at 1:41pm PST