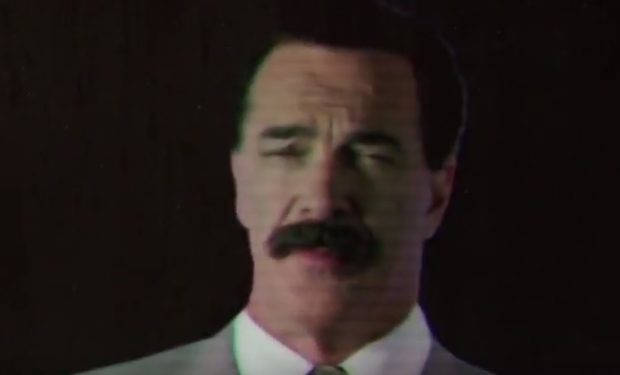 In the Marvel’s Agents of S.H.I.E.L.D. episode “Option Two,” the team is trapped and under siege at the Lighthouse. On a grainy TV screen appears a mustached General Stoner wearing a 1970s suit. On the screen, he announces to the team, “You are experiencing an apocalyptic event. You are humanity’s last hope.” Will General Stoner be able to help or hinder their escape?

[Check out Warburton as Puddy aka The Devil on Seinfeld]

[Check out Warburton in Rules of Engagement]

General Stoner is portrayed by Patrick Warburton. Warburton is known for his roles on Netflix’s A Series of Unfortunate Events (Lemony Snicket), Rules of Engagement (Jeff Bingham), Less Than Perfect (Jeb Denton), and Seinfeld (Elaine’s hockey loving face-painting car guy boyfriend David Puddy, DEFINITELY SEE LINK ABOVE), among others. Warburton is the voice of many animated characters including Joe Swanson on Family Guy, Buzz Lightyear, Flynn on Skylanders, Sheriff Stone on Scooby-Doo, The Tick, Ken in Bee Movie, Kronk in The Emperor’s New Groove, to name just a handful. Marvel’s Agents of S.H.I.E.L.D. airs Fridays at 9pm on ABC.

Warburton is still at it! Check him out at the Devils Playoffs game last week!

NJ Devils playoff game 4 Yet to be noticed… #njdevils #nhlplayoffs