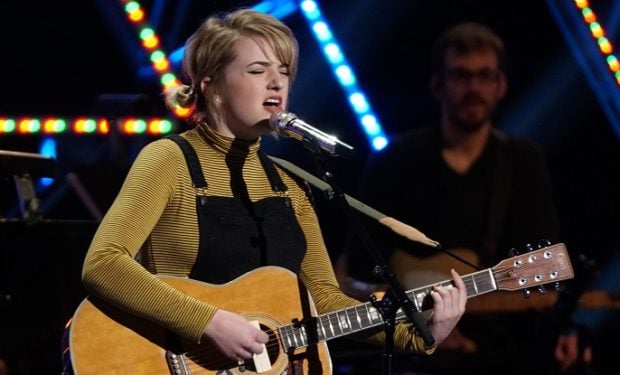 American Idol hopefuls are in Hollywood waiting to hear who gets to perform one more time before the Showcase Round on Monday, April 2. After the Showcase Round, judges Katy Perry, Lionel Richie and Luke Bryan will announce which Idol finalists made it to the Top 24. One of the big contenders is Maddie Poppe, the 20-year-old singer/songwriter from Clarksville, Iowa who favors pigtails.

[Check out Maddie Poppe’s album Songs from the Basement]

Maddie released her first album of original songs “Songs from the Basement” in 2016, when still a teenager. The 7-track album includes the single “I Don’t Care to Belong.” She sings from a high school girl’s pov. In her Aimee Mann-esque voice, Maddie sings the clever opening line: “Let’s be honest, girls in high school are the meanest people to ever exist.” But that was two years ago and Maddie’s not in high school anymore. It looks like she found where she belongs — on the American Idol stage! American Idol airs Sundays and Mondays at 8pm on ABC.

Virginia, North Carolina, California, Georgia and Iowa cross paths. What do you get? Idk some sorta pic like this. #americanidol #trickortreat?