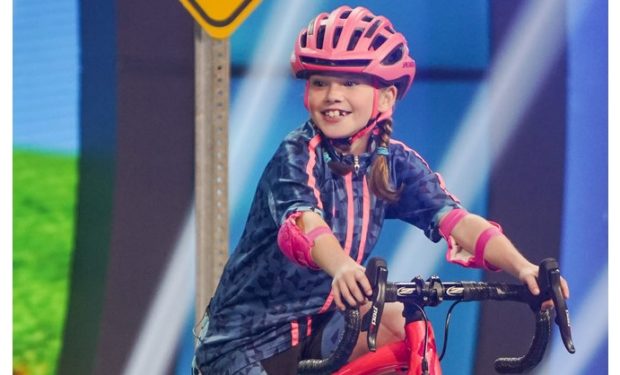 On the Little Big Shots episode “Tour de Harvey,” American TV host Steve Harvey meets 9-year-old professional cyclist and sports reporter Ruby Isaac from the UK. Ruby started riding at 7, since then she’s been dreaming of riding in the Olympics. In the meantime, Ruby has launched her own TV show called Kids Cycling Show.

On Kids Cycling Show, Ruby doesn’t just talk about how cool cycling is but she also gives demonstrations — including one where she makes pancakes while on her rollers (when she trains inside, her bike is on rollers). Ruby also interviews adult professional cyclists including downhill mountain champ Fabien Barel, among others. See Kids Cycling Show videos below. Not only is Ruby a great athlete but a great interviewer, too! Go Ruby, Go Ruby! Little Big Shots airs Sundays at 8pm on NBC.

Ruby makes flipping a pancake while riding a bike look so easy!