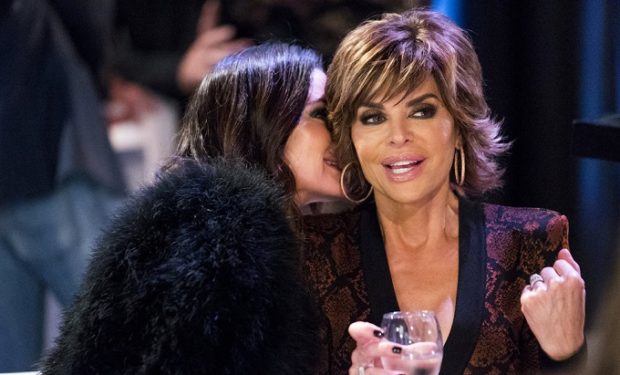 In The Real Housewives of Beverly Hills episode “Better Latex Than Never,” Erika Girardi arranges a night-out for the ladies in Berlin. Kyle Richards, Dorit Kelmsey, Teddi Mellencamp Arroyave, and Lisa Rinna join Erika on a boat which will led them to a “fetish-down, very edgy” club. For the occasion Erika pours herself into a red latex blouse (she had help from “her gays”). All of the ladies look terrific. Kyle points out to Lisa Rinna, “If I had a body like yours I wouldn’t cover it.” That’s when Rinna reveals a short tuxedo jacket. When she takes off the jacket, she’s wearing nothing but a black teddy. The crowd goes wild, especially Erika.

Lisa Rinna points out they’re having fun on a boat because Lisa Vanderpump isn’t there! It also helps when Erika Girardi is nice to Teddi. The Real Housewives of Beverly Hills airs Tuesdays at 9pm on Bravo.