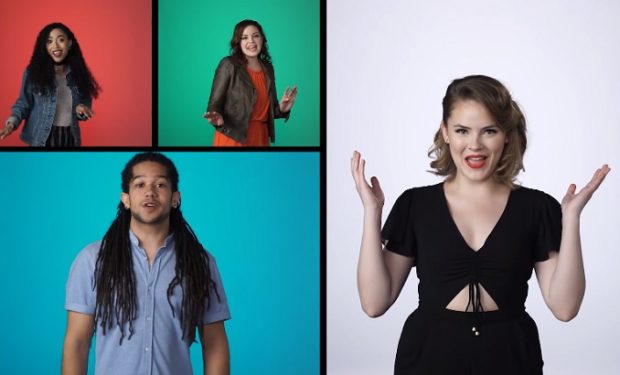 Four of the 7 members of D Cappella (screengrab)

The Top 10 singers on American Idol are at Disneyland preparing for their next round of performances. They’re singing favorite songs from Disney movies. With the help of Frozen singing sensation Idina Menzel, Idol contestants are rehearsing their songs at the Disney theme park. In between Cade Foehner’s performance of “Kiss the Girl” from The Little Mermaid and Maddie Poppe’s “The Bare Necessities” from The Jungle Book will be performances by D Cappella, Disney’s new a cappella group. The 7 young men and women of D Capella will sing classic Disney songs throughout the American Idol show on Sunday, April 29.

D Cappella works with Deke Sharon, arranger for the popular Pitch Perfect movies. The group of singers and vocal percussionists range from 18 to 30 and are currently on a U.S. tour called It’s Disney, Pitch! Backstage reported in December that members of D Capella are chosen via open auditions. If you’re between 18 and 30 and can carry a tune, you have a chance. American Idol airs Sundays and Mondays at 8pm on ABC.