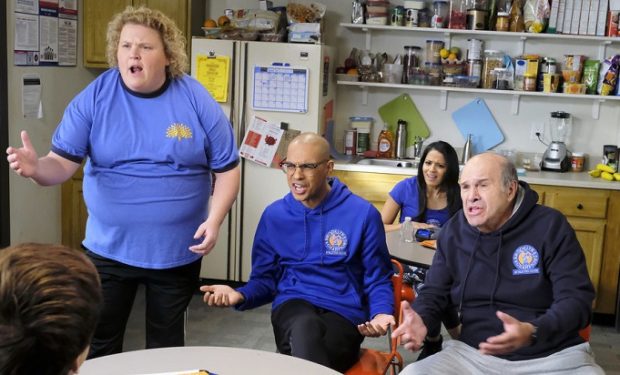 On the new Mindy Kaling sitcom Champions, Brooklyn Champions gym owner Vince (Anders Holm) discovers that he has a 15-year-old son. His name is Michael (J.J. Totah). He’s gay, more interested in musical theater than working out, and is now living with Vince. On the second episode, Vince announces his new role as father to the employees at the gym including Uncle Bud.

[Check out Costanzo as Sal in City Slickers]

Uncle Bud is portrayed by Robert Costanzo. The veteran actor has appeared on so many TV shows over the years it’s difficult to choose a handful to feature (from Modern Family to Family Ties). He’s recognized for his roles in several 1990s films including Total Recall (Harry), Die Hard 2 (Sgt. Vito Lorenzo), and City Slickers (Sal), among others. Or maybe you recognize his voice from the animated Batman series as Detective Harvey Bullock. Fun fact: Costanzo made his acting debut in the brilliant 1975 film Dog Day Afternoon as a NYPD cop. Champions airs Thursdays at 9:30pm on NBC, right after Will & Grace.