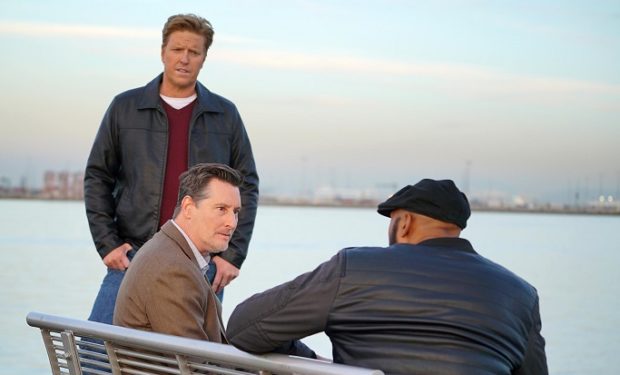 In the Marvel’s Agents of S.H.I.E.L.D. episode “Principia,” the team is trying to save the world before it’s smashed into pieces. When they track down an armed and dangerous Tony Caine, Agent Alphonso “Mack” MacKenzie (Henry Simmons) realizes that he knows the man. He calls him Candyman. Caine calls Mack “Mack Hammer.” Mack convinces Caine to help the team “before it’s too late.” Tony Caine is portrayed by Jake Busey, son of actor Gary Busey (see photo below).

Jake Busey is known for his roles on NCIS (Whit Dexter), Ray Donovan (LSN Chef Dave and Acid Man), Freakish (Earl), From Dusk Till Dawn: The Series (Prof. Aiden Tanner), Good Vibes (Turk), Sex, Love & Secrets (Ray Foley), and Shasta McNasty (Dennis), among others. Fun fact: Jake made his acting debut in the 1978 film Straight Time starring Dustin Hoffman and his father (Jake played the son of his father’s character). Marvel’s Agents of S.H.I.E.L.D. airs Fridays at 9pm on ABC, right after Once Upon a Time.