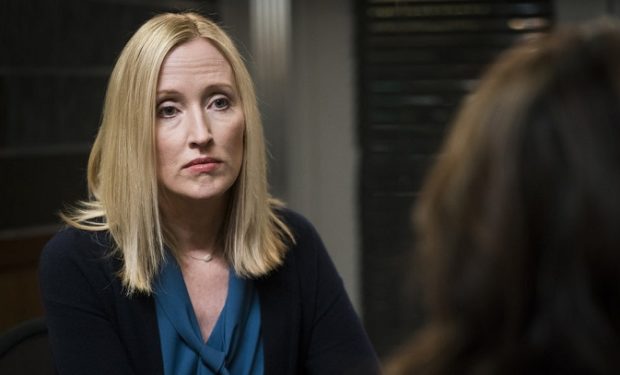 In the Law & Order: Special Victims Unit episode “Dare,” a little girl named Zoey disappears. Her two friends from school said the last time they saw her was on the bus. When they got off the bus, they said Zoey stopped to talk to a man while they went inside. The SVU team later finds Zoey in a school gymnasium and they rush her to the hospital. At the hospital she dies. It becomes a criminal case when a surgeon, Dr. Lorraine Franchella, harvests her organs without parental consent. (Franchella is defended by defense attorney Nikki Staines.)

[Watch Moloney as Donna Moss on The West Wing]

Dr. Franchella is portrayed by Janel Moloney. The two-time Emmy nominee is known for her roles on American Crime (Raelyn), The Leftovers (Mary Jamison), The Blacklist (Kat Goodson), Alpha House (Senator Peg Stanchion), and The West Wing (Donna Moss), among others. She also starred in the 2005 TV movie Amber Frey: Witness for the Prosecution as Scott Peterson’s mistress Amber Frey. Law & Order: Special Victims Unit airs Wednesdays at 9pm on NBC, right after The Blacklist and right before Chicago P.D.