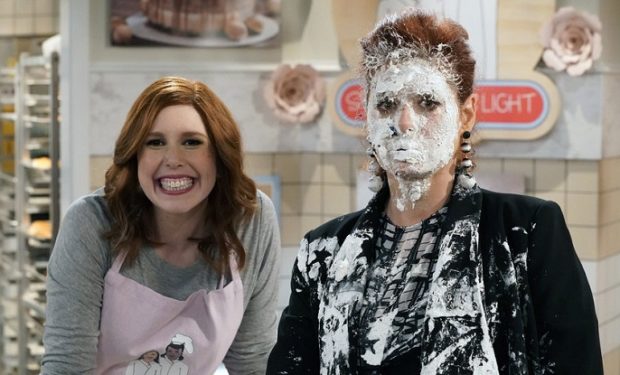 In the Will & Grace episode “The Beefcake and the Cake Beef,” Will (Eric McCormack) takes Jack’s (Sean Hayes) advice and reunites with his first love, beefcake Michael (guest star Cheyenne Jackson). Meanwhile, when Grace (Debra Messing) learns that a baker refuses to make a cake for Karen (Megan Mullally), Grace “fights for Karen’s civil rights”… even if it’s for President Trump.

The baker, Amy, is portrayed by Vanessa Bayer. The comedic actress is known for her roles on Saturday Night Live (2010-2017), and in the films Trainwreck (Nikki), and Office Christmas Party (Allison, see photo below), among others. Fun fact about Bayer: While studying at the University of Pennsylvania, she interned at Sesame Street and Late Night with Conan O’Brien. Will & Grace airs Thursdays at 9pm on NBC, right after A.P. Bio and right before Champions.

#tbt to the most amazing goodnights!