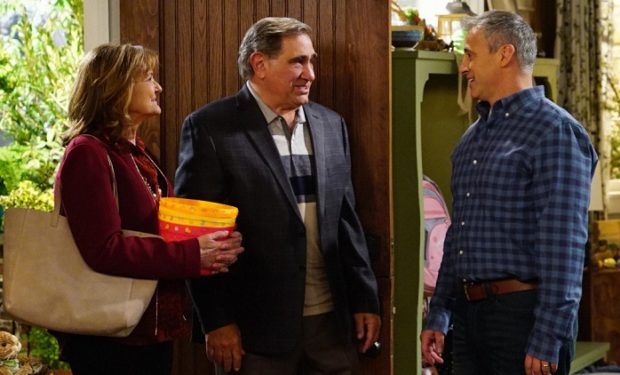 In the Man with a Plan episode “Out with the In-Laws,” things get awkward when both sets of in-laws show up at Andi (Liza Synder) and Adam’s (Matt LeBlanc) house. The married couple do their best to keep the peace between Adam’s parents Bev (Swoosie Kurtz) and Joe (Stacy Keach) and Andi’s parents, Frank and Alice.

Alice is portrayed by Nancy Lenehan and Frank is portrayed by Dan Lauria. Lauria is known for his roles on Pitch (Al Luongo), Sullivan & Son (Jack Sullivan), Ed (Richard Vessey), JAG (Allen Blaisdell), The Hoop Life (Leonard Fero), Party of Five (Coach Russ Petrocelli), The Wonder Years (Kevin’s dad Jack Arnold), and Cagney & Lacey (Det. Harry Dupnik), among many others. Man with a Plan airs Mondays at 8:30pm on CBS, right after Kevin Can Wait and right before Superior Donuts.

Thank You @realdanlauria for signing my photos. I appreciate it Sir. You are awesome!!! pic.twitter.com/FSfbBdHnfE