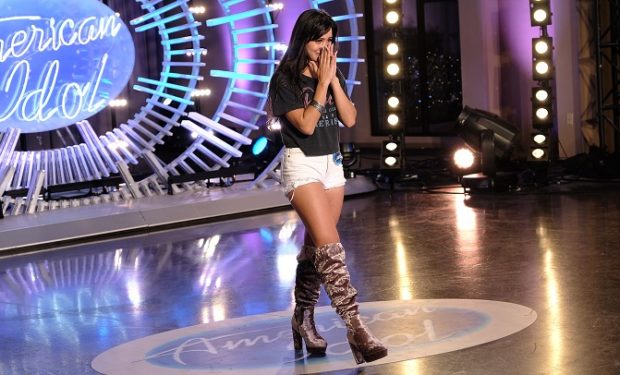 Most of the young aspiring singers auditioning for American Idol Season 16 were born and raised in America. During the second night of auditions, judges Lionel Richie, Katy Perry, and Luke Bryan will meet Venezuela-born singer (and dancer) Michelle Sussett. Her audition is a memorable one as she wears a black “Rebel” t-shirt, white short-shorts, and knee-high velvet boots. Michelle’s boots weren’t just made for walkin’ but dancin’ too. Both Perry and Richie join her on stage to dance with her. Michelle’s energy level is through the roof. She sings parts of Selena‘s “Techno Cumbia” in Spanish and “Sorry Not Sorry” by Demi Lovato.

According to Michelle Sussett’s Twitter account, she was “living hopeless in Venezuela” before moving to Miami, Florida almost four years ago. The 22-year-old is grateful and celebrates with song wherever she goes. Check out the video of Michelle dancing outside the American Idol auditions. Around Michael Jackson‘s Hollywood Star she sings (and dances to) his Thriller hit “Pretty Young Things.” American Idol airs Sundays and Mondays at 8pm on ABC.

I left #Venezuela looking for a better future and to help my family almost 4 years ago.. Now my dreams are finally coming true. I AUDITIONED FOR @AmericanIdol on @ABCNetwork Tune in March 11th to follow my journey!! GOOD THINGS CAN STILL HAPPEN TO US VENEZUELA! ???KEEP IT UP pic.twitter.com/LSYKOkCW23