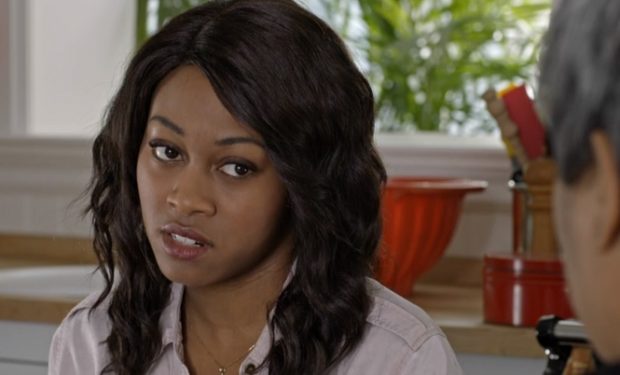 Shanice Banton in Her Stolen Past, Lifetime|Harlequin

The Lifetime Movie Her Stolen Past is about medical student Sonya Daniels (Shanice Banton). She’s just one semester shy of graduating when she learns her mother has been murdered. Police say it was a random attack but when Sonya finds a 25-year-old birth certificate of a missing baby in her mother’s closet, she starts to put two and two together. (The little girl was never found.) The movie Her Stolen Past is based on Lynette Eason’s Harlequin novel.

[Check out Munro as Dorothy in Brooklyn]

The character Missy is portrayed by Samantha Munro. The Canadian-born actress is known for her roles on Netflix’s Between with Jennette McCurdy, Degrassi: The Next Generation (also with Shanice Banton), and the TV movie The Unauthorized Beverly Hills, 90210 Story (Shannen Doherty see photo below). Munro is also recognized for her role as Dorothy in the 2015 Oscar-nominated film Brooklyn based on Colm Tóibín’s novel of the same title. Her Stolen Past premieres on Lifetime on Friday, February 2 at 8pm.