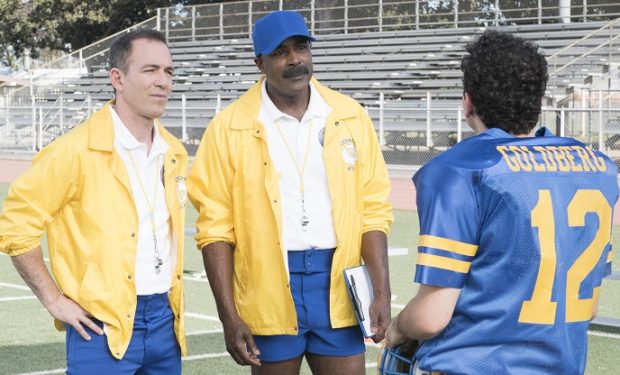 In The Goldbergs episode “Hail Barry,” Barry (Troy Gentile) makes the high school football team but is quickly benched by Coach Mellor (Bryan Callen). It’s not an easy pill to swallow but when Barry realizes that his playing ability isn’t really up to snuff, he and his brother Adam (Sean Giambrone) come up with another, more creative way to support the team. In this episode, Coach Mellor is joined by Coach Cast on the football field.

Coach Cast is portrayed by retired NFL football player Mike Quick. Before becoming the first-round pick by the Philadelphia Eagles in the 1982 NFL Draft, Quick played college football at North Carolina State University. Quick stayed with the Eagles for his entire NFL career (1982-1990). The 5x Pro Bowl and 2x First-team All-Pro player retired due to severe patella tendinitis. Quick, now 58, is a color commentator for the Eagles radio broadcasts on WTEL-AM and WIP-FM with Merrill Reese (who also makes an appearance on the show!). The Goldbergs airs Wednesdays at 8pm on ABC, right before Speechless.