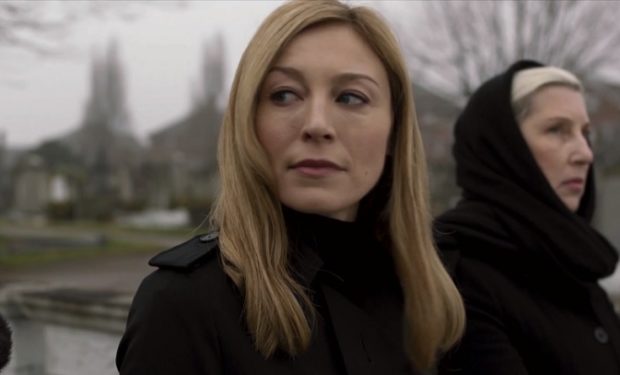 The protagonist of the BBC/AMC drama McMafia is Alex Godman (James Norton). He’s the British-raised son of a Russian mafia boss who is trying to leave organized crime. In the series premiere, after a tragic event, Alex tries to protect his family and fiancée Rebecca Harper, as he gets drawn into the dark world of global crime. The TV series is based on the book McMafia: A Journey Through the Global Criminal Underground by Misha Glenny.

Alex’s fiancée Rebecca Harper is portrayed by Juliet Rylance. The British-born actress is known for her roles on American Gothic (Alison Hawthorne-Price), The Knick (Cornelia Roberson), and in the Sinister horror films (as Tracy), and in 2012 Noah Baumbach film Frances Ha (Janelle), among others. Fun facts: Rylance is married to actor/director Christian Camargo (The Hurt Locker, The Twilight Saga). She is the stepdaughter of actor/director/playwright Sir Mark Rylance, who also has a role in Camargo’s film Days and Nights (see link above). McMafia airs Mondays at 10pm on AMC.