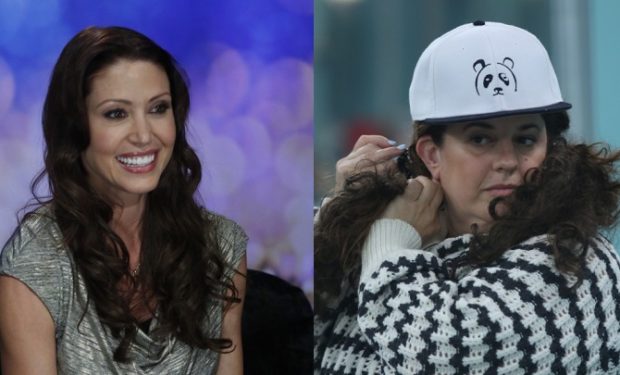 The first week of the first-ever Big Brother: Celebrity Edition was an exciting one. American Pie actress Shannon Elizabeth won the first challenge (she hung onto a gigantic award suspended from the ceiling as it spun and paint was poured over her) but it was The Cosby Show actress Keshia Knight Pulliam who became HOH. The “girls” strategy of eliminating a “boy” first worked. UFC champ Chuck Liddell was the first celebrity eliminated. Chuck told Big Brother host Julie Chen, “I don’t think this is my game. I really want to be on The Amazing Race with my wife.”

[Check out Shannon and Marissa in Scary Movie]

Two celebrities to watch out for are Shannon Elizabeth and Marissa. As Sugar Ray singer Mark McGrath said after his first talk with Shannon in the house, “She’s one smart chick.” And then there’s Shannon’s friend, Broadway star Marissa Jaret Winokur (Hairspray). It would have been cool if Shannon kept it a secret for more than an hour that the two of them have been friends for years, but oh well. Shannon and Marissa were on two sets together — Scary Movie (see link above) and they both competed on Season 6 of Dancing With the Stars. Marissa and Tony Dovolani came in fourth; Shannon and Derek Hough came in sixth. See cute photo below. (Kristi Yamaguchi won with Mark Ballas). Big Brother Celebrity airs Sundays, Mondays, Wednesdays and Fridays at 8pm on CBS.