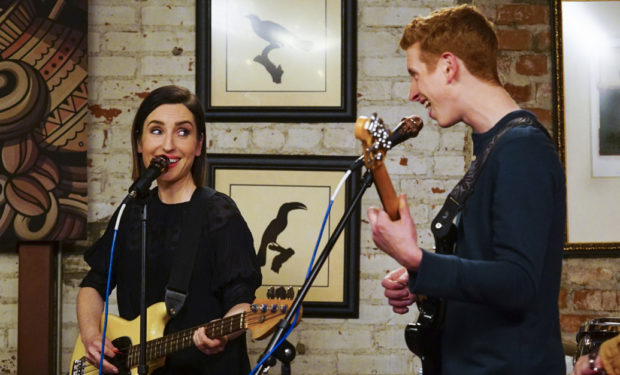 In the Life In Pieces episode “Goose Friends Auction Fog,” Jen (Zoe Lister-Jones) sings in Tyler’s (Niall Cunningham) band, Funeral Goose. His ex-wife Clementine (Hunter King) used to be the lead singer. But when “Aunt” Jen steps in the spotlight she gets caught up in the excitement and her nephew Tyler is put in an awkward position.

[You can watch Zoe Lister-Jones in Band Aid now]

If you liked listening to Lister-Jones sing in Funeral Goose, you should check out her new film Band Aid. (She wrote and directed it.) Lister-Jones plays Anna, a woman stuck in an unhappy marriage. Her husband Ben is played by Adam Pally (Peter on The Mindy Project). Itching to create something, Anna comes up with the idea of turning all of their marital fights into songs. Their neighbor Dave, SNL alum Fred Armisen, is on drums. P.S. Lister-Jones’ husband on Life in Pieces, Colin Hanks, is in it too (as Uber Douche). Life in Pieces airs Thursdays at 9:30pm on CBS, right after Mom.