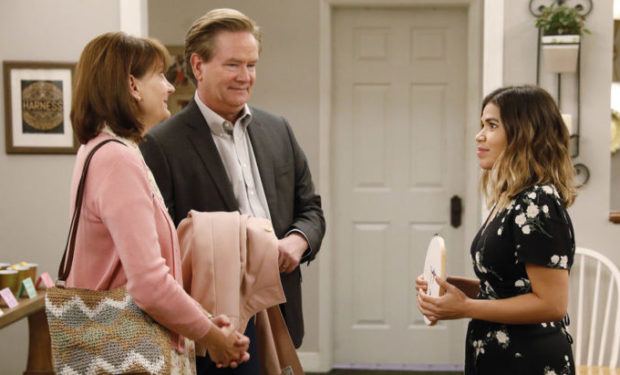 In the Superstore episode “Golden Globes Party,” Amy (America Ferrera) throws her annual Golden Globes watching party at her house. The difference this year is that she’s the single host (now that she and Adam are divorced). Everyone from Cloud 9 shows up including store manager Glenn (Mark McKinney) and his wife Jerusha. Ferrera said of the episode “It’s just so much fun when we get out of the store and we see all of these characters in a different environment and we see them out of their uniforms.”

[Check out Kerri as Kathy in Wunderlust with Jennifer Aniston, Paul Rudd]

Jerusha is portrayed by Kerri Kenney. She’s known for her roles on 2 Broke Girls (Denise), Reno 911! (Deputy Trudy Wiegel), Still Standing (Marion Fitzsimmons), The Ellen Show (Pam), and the MTV comedy sketch show The State, among others. P.S. Kenney is the new Matt Damon Kristen Wiig movie Downsizing (as single mom Kristen). And as you’ll see below, she’s into Pink. Superstore airs Thursdays at 8pm on NBC, right before The Good Place.

Can we talk about how much I love @KerriKenney pic.twitter.com/6Bg12FNk5Q

My friend does shit like this, dangling from a skyscraper and singing live. I choked on a peanut shell today and coughed so hard I farted. pic.twitter.com/Yxv3VmZipM