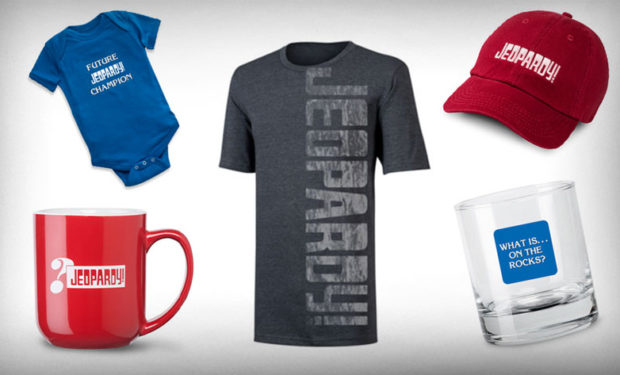 Always plug the brand. You don’t get to be a household name for as long as Alex Trebek has without making sure you’re always in team colors. Even when Trebek has ventured out of the Jeopardy studio — say for a memorable appearance on Cheers — he’s always still Alex Trebek, host of Jeopardy, the TV game show with the most passionate fans in the world. Trebek was in perfect form this week as he hit Facebook to tell those passionate fans that as a result of a fall, he had to have some blood clots removed from his brain. (Did the surgeons take advantage of the opportunity and say, “well, Alex, Jeopardy certainly is hard but it ain’t brain surgery!?” Trebek would have appreciated the joke.)

[No, not this one! Though you can get this one at Amazon]

Trebek’s reveal was done in typically understated style. Just a little subdural hematoma, the gallant host explained. Trebek looked comfortable (jeans, sweater) and on brand, as they say (in a cool blue — Dodger blue? — Jeopardy baseball cap). Trebek hardly looks his 77 years, but the announcement was a sad reminder to fans that one day, not yet but one day, they’ll have to watch Jeopardy hosted by somebody else. For trivia buffs it’ll be like the day Buddy Holly died. In the meantime — and may it be a long and healthy meantime for the consummate host — people have been asking where they can get that snazzy blue Jeopardy hat Alex is sporting. Here’s the Jeopardy Store where they’re available, with lots more swag too.