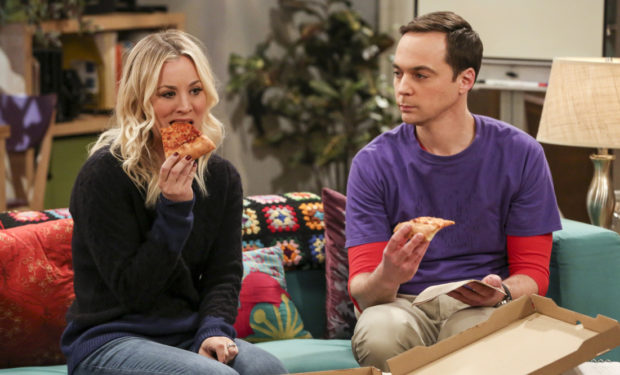 In The Big Bang Theory episode “The Solo Oscillation,” Sheldon (Jim Parsons) kicks Amy (Mayim Bialik) out to work solo. While Amy and Leonard (Johnny Galecki) bond during their science experiments, Sheldon has lost his science mojo. (Turns out Leonard and Amy were both spelling bee champs too!) When Sheldon needs some scientific inspiration, who does he call? You got it, Penny (Kaley Cuoco). And she brings pizza. Sheldon explains to Penny that he’s left string theory and is trying to come up with a new approach to dark matter.

Penny says, “So it’s your rebound science.” When Sheldon asks “What’s that?” she explains, “Well, not the science you spend the rest of your life with but the one you use to make yourself feel pretty again.” Sounds about right. The Big Bang Theory airs Thursdays at 8pm on CBS, right before Young Sheldon.

Sometimes scientific inspiration comes from the most unlikely of sources. ?
Don’t miss a new #BigBangTheory this Thursday at 8/7! pic.twitter.com/iNsBXx0K2t