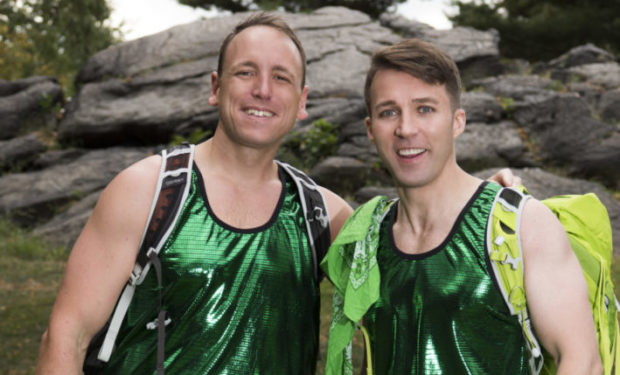 Two of the most competitive people competing on Season 30 of The Amazing Race are not professional athletes but competitive eaters. That’s right, Joey “Jaws” Chestnut is teamed up with fellow record-breaking eater Tim “Eater X” Janus. While Joey Chestnut is best known for holding the Nathan’s Famous hot dog and buns records (72 in 10 seconds), Tim Janus (who is now retired from competitive eating) was known for wearing a painted mask while at work.

In an August 2010 episode of Shaq Vs. on ABC, Tim coached a team led by former NBA star Shaquille O’Neal to beat Joey Chestnut in a hot dog eating contest. The contest was held outside Caesars Palace in Las Vegas. See video below. Six years later, Janus retired from competitive eating. When he announced his retirement he wrote: “I’ve wondered how long-term stupid competing is for my health. I can’t ignore that feeling anymore.” The Amazing Race 30 airs Wednesdays at 8pm on CBS.