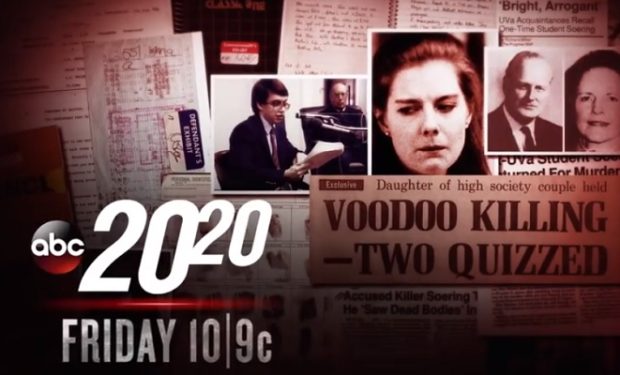 ABC 20/20 correspondent Elizabeth Vargas investigates the 1985 double homicide of Derek and Nancy Haysom. The couple’s teenage college student daughter, Elizabeth Haysom, and her boyfriend at the time, Jens Soering, were convicted. Haysom pleaded guilty to two counts of accessory to murder; Soering was convicted of two counts of first-degree murder. Elizabeth, whose murdered father was a retired Canadian steel executive, and Jens, son of German diplomat Klaus Soering, met at the University of Virginia where they were both students. Months after the Haysoms were slashed and stabbed to death in their home, Elizabeth and Jens were arrested in London on charges of check fraud. Soering initially confessed to the murders to protect Haysom (he assumed he would have diplomatic immunity) but later said it was a false confession. Haysom was diagnosed with borderline personality disorder, and was sentenced to 90 years in prison. Soering, who is serving two consecutive life terms, says he is innocent.

[Killing For Love – a movie about the case]

In 2009, 42 pieces of DNA evidence from the Haysom crime scene were tested and none of them were from Soering. In October 2017, former Deputy Attorney General of Virginia Gail Starling Marshall held a press conference in support of Soering’s innocence and his pardon petition. But Soering is still in prison. While serving his time, Soering has converted from Buddhism to Roman Catholicism and has written many books including his 2007 book The Convict Christ: What the Gospel Says About Criminal Justice. Soering’s most recent book, A Far, Far Better Thing: Did a Fatal Attraction Lead to a Wrongful Conviction? (2017), was co-written with Pulitzer Prize-nominated Christian author Bill Sizemore, and includes a forward by actor Martin Sheen, who is also a practicing Catholic. Note: Vargas, also a Catholic, has spoken at length about how prayer has helped her struggle with anxiety and addiction. ABC 20/20 airs Fridays at 10pm.