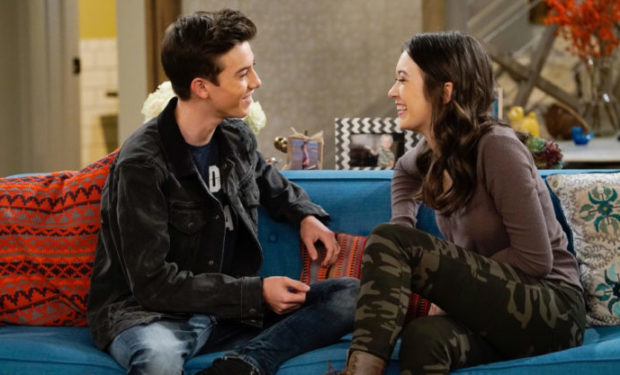 In the Man with a Plan episode “Into the Weeds,” Adam (Matt LeBlanc) thinks Kate’s (Grace Kaufman) boyfriend, Tyler, is a pothead. When he decides to confront Tyler he doesn’t get the support he expects from his wife Andi (Liza Snyder). Tyler is portrayed by Griffin Gluck.

The 17-year-old actor is known for his roles on Netflix’s American Vandal (Sam Ecklund), Impastor (Austin McCann), Life in Pieces (Aiden), About a Boy (Clay), Red Band Society (Charlie), Silicon Valley (Adderall Boy), Back in the Game (Danny Gannon), Private Practice (Mason Warner), and United States of Tara (Monty), among others. Gluck is also recognized for his roles in the films Why Him? (Zoey Deutch’s little brother Scotty Fleming — he’s real-life brother of Zoey, see photo below!), Just Go with It (Jennifer Aniston’s son Michael, see link above), and Sideways (Pharmacy Boy). Man with a Plan airs Mondays at 8:30pm on CBS, right after The Big Bang Theory, and right before Superior Donuts. (You can also try a CBS All-Access free trial and stream 9000+ episodes plus live TV.)

@baileemadison said it 10 times better than i could already #justgowithit