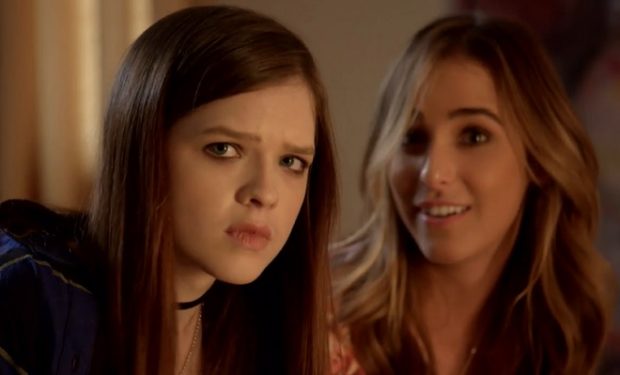 In the Lifetime movie Web Cam Girls, teenager Alex suspects the worst when her “hot mess” cousin Carolyn (Lorynn York) disappears. Carolyn has been making serious money by “camming” — getting sexy with strangers via a web cam under the alias Naughty Mary. Alex thinks Carolyn broke the golden rule of camming and met one of her clients. (She was right!) But when Alex speaks up about Carolyn, no one believes her. It’s up to Alex to save Carolyn.

[Check out Sedona as Blake Lively’s sister in The Shallows]

Alex is portrayed by Sedona Legge. The 18-year-old fashion model made her her acting debut in the 2016 film The Shallows starring Blake Lively (she played Chloe, Lively’s little sister). When Legge was asked what an acting ideal role for her would be, she told WWD: “I would love to see my favorite books, the Fablehaven series, made into movies and [I’d love to] play the lead role, [with] Tim Burton as director because it is just his style.” Web Cam Girls premieres on Lifetime on Saturday, December 30 at 8pm.

It’s beginning to look a lot like Christmas????? Shot & Styled by: @sammariesaint Make-up by: @kate_romanoff