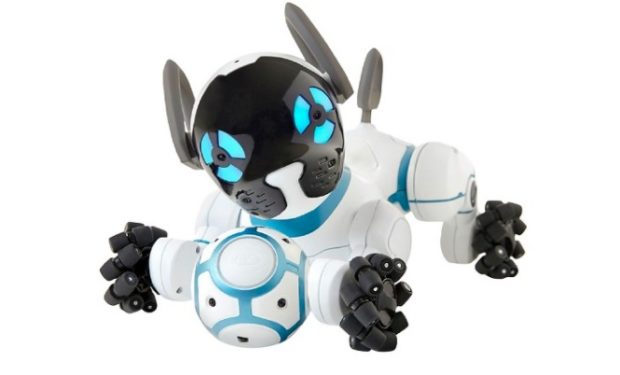 Want to know a secret? Kids want to be in charge. And they’re not. (Okay, it’s not much of a secret…) So you know what kids of any age really love? The opportunity to exercise some authority. The great part about this? Parents also love it when their kids get to be in control, as long as it’s in a risk-free environment where the consequences are safe. Enter CHiP, the robot dog from WowWee. Chip will fetch his smart ball if kids roll it. He’ll dance with kids who lift his front paws. Chip is personalized too — he becomes your child’s dog because a SmartBand links the robot dog to its owner. Chip won’t follow another child home — he’s smart! Chip also has an independent streak — he takes care of himself when his batteries are low, finding his way back to the charging bed.

Children with the Chip robot dog get to learn responsibility without too much downside — Chip won’t get lost or run away. You don’t have to worry about forgetting to feed him and he’s exceedingly well-behaved for a puppy. Artificial intelligence has not yet been able to imbue its robots with the capacity for real love, and real life puppies are cuter and softer. But Chip is a different animal, you might say. Kids really do love this cross between a Star Wars robot and a real pet. (WowWee makes several different toy robot types, too, for the canine averse — like dinosaur robots.)  One reviewer says of Chip: “[CHiP] is smaller than Zoomer, so be prepared for his size. But he packs a lot of skills into that size.”

The WowWee’s Chip Robot Toy Dog is on sale online at retailers: