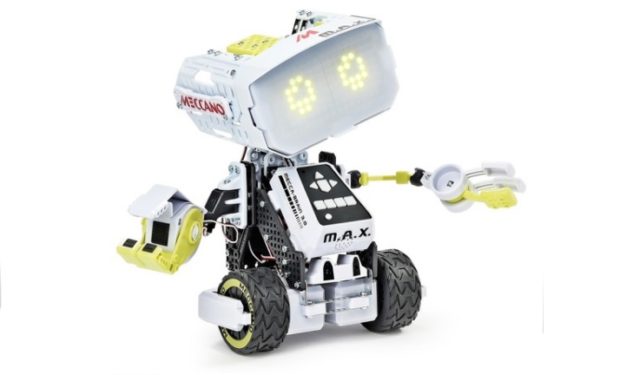 The Meccano-Erector M.A.X. Robotic Toy with Artificial Intelligence is a great 21st century toy. As the business site Quartz one said perfectly: “The best toys focus on what the child can do, rather than what the toys can do.” Enter the Meccano Robotic Toy, which gives imaginative kids a platform to put their imaginations to work. As Meccano says: “M.A.X. combines Artificial Intelligence (AI) with customizable programming. The result is a one-of-a-kind robot of your own creation!” That’s the holy grail of 21st century gift-giving — personalization. Now you can give kids something they can personalize themselves while learning valuable skills along the way.

Kids love the M.A.X Robotic Toy because they build it themselves — and because it puts them in charge both during the construction and afterwards. After kids build it, the M.A.X. Robot follows kids’ commands. The foot-tall M.A.X. comes with “built-in infrared sensors, to help it sense obstacles and navigate surfaces as it rolls around on sturdy smart wheels.” It’s not for every kid — patience and an attention span is required (there are 332 parts!). The 10 and up recommendation is a good benchmark here. But the fun work of putting M.A.X. together is worth it when M.A.X. answers the first voice command. Yup, as one reviewer mentions: “M.A.X. becomes a fully articulated and speaking robot using his pre-programmed software through a voice and movement setup in Levels 1 and 2.”

The Meccano-Erector M.A.X. Robotic Toy with Artificial Intelligence is on sale online at retailers: