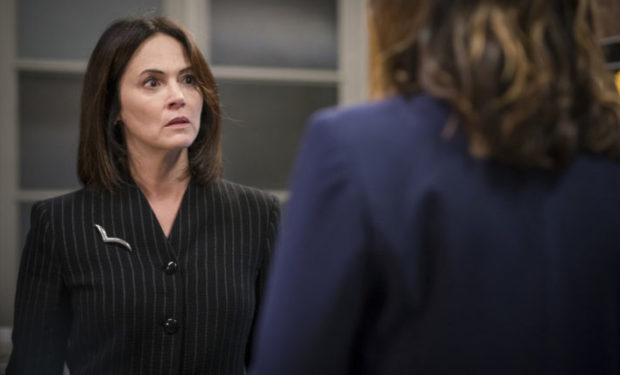 In the Law & Order: Special Victims Unit episode “Something Happened,” Lt. Olivia Benson (Mariska Hargitay) uses unconventional tactics to help a rape victim. The victim, Laurel (Melora Walters, Magnolia), was found laying on the floor of a museum and brought to a hospital. When she meets Benson, she can’t remember any details from the traumatic night before. During Benson’s investigation, she asks Laurel’s sister Leah to come to the precinct to help. It’s revealed that every Sunday, Laurel was taken by her father to the museum where she was found.

[Check out Going as First Lady Walker in House of Cards]

Laurel’s sister Leah is portrayed by Joanna Going. She’s known for her roles on Kingdom (Christina Kulina), House of Cards (First Lady Tricia Walker, see link above), Mad Men (Arlene), Close to Home (Samantha Veeder), Spin City (Julia Rhodes), and Another World (Lisa Grady), among others. She’s also recognized for her role in the film The Tree of Life (as Sean Penn’s wife). On a personal note: Going was married to actor Dylan Walsh of Nip/Tuck (2004-2012), as was Melora Walters (1996-2003). Law & Order: Special Victims Unit airs Wednesdays at 9pm on NBC.