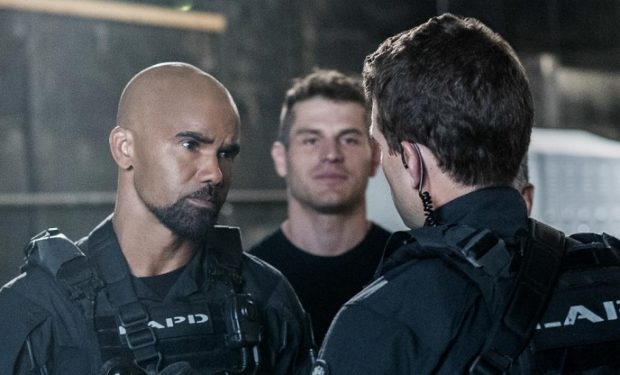 On the S.W.A.T. episode “Cuchillo,” when not scouring the streets of Los Angeles searching for four escaped convicts, Hondo (Shemar Moore, Criminal Minds) and the team run an indoor exercise. Hondo’s rival Mumford (Peter Onorati) and his team win the exercise as Street (Alex Russell) displays a flagrant disregard for protocol. While Hondo chews out Street and reminds him that “S.W.A.T. strength is in the pack,” Mumford and his crew including Rocker watch with smirks on their tough guy faces.

Rocker is portrayed by Lou Ferrigno, Jr., son of the former bodybuilder actor who played The Hulk. This isn’t Ferrigno Jr.’s acting debut. The 6’2″ tall actor has also been on NCIS: Los Angeles, Bones, The Exes, The Young and the Restless (Officer Kramer), Teen Wolf, and How I Met Your Mother (Louis), among others. And yes, Junior spends a lot of time in the gym, too. See photos below. S.W.A.T. airs Thursdays at 10pm on CBS, right after Life in Pieces.