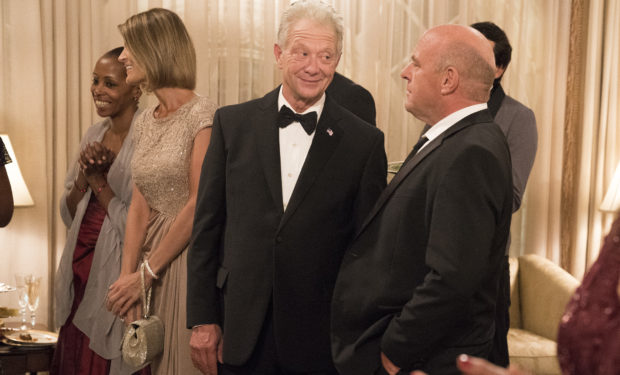 In the Scandal episode “Vampires and Bloodsuckers,” the Gladiators celebrate Quinn (Katie Lowes) and Charlie’s (George Newbern) big day, until Quinn goes missing. Meanwhile at the White House, President Mellie Grant (Bellamy Young) and Chief of Staff Cyrus Beene (Jeff Perry) deal with the aftermath of President Rashad’s assassination. Cyrus will have another exchange with Fenton Glackland, the billionaire who said maybe he’d run for president. (Like it was no big deal.) Cyrus didn’t react well when Fenton threw his half-baked idea to run for president out there — but some speculate there’s a romantic spark between the two powerful men in D.C.

[Dean Norris is a regular presence in serious action flicks, at Amazon]

Fenton Glackland is portrayed by Dean Norris. He’s known for his roles on The Big Bang Theory (Colonel Richard Williams), Under the Dome (Big Jim), and Breaking Bad (Walter’s brother-in-law Hank Schrader), among many others. Norris is also recognized for his roles in the action films Lethal Weapon 2 (Tim Cavanaugh), Hard to Kill (Det. Sgt. Goodhart — see link above), and Total Recall (Tony), to name a few. In real life, Norris is married with five kids! Scandal airs Thursdays at 9pm on ABC, right after Grey’s Anatomy, and right before How To Get Away with Murder.

Feeling SCANDALous. Excited to be apart of this show!! #scandal