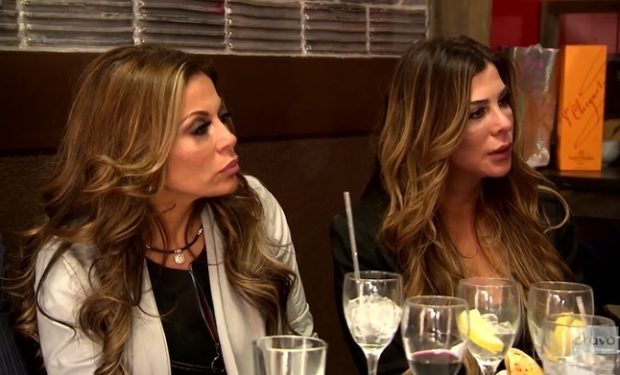 On The Real Housewives of New Jersey episode “Not Over It,” Dolores Catania stands by her friend Siggy Flicker. Siggy tells everyone that she’s still not over the fact that new wife Margaret Josephs — founder of MacBeth Collection fashion line — organized a memorial for Joe Gorga’s mother (who she never met!). Not only that, but Margaret excluded Siggy from the special moment. It doesn’t help when Melissa Gorga tells Siggy that she did miss out on “something amazing.” When Margaret joins the conversation, Siggy sticks out her tongue at Margaret, and Dolores can’t help but to smile. You know what else makes Dolores smile? Her son Frank.

Frank Catania, Jr. is a freshman at Sacred Heart University in Fairfield, Connecticut. The Don Bosco Prep graduate is also pursuing a modeling career. His mother Dolores is very proud — and not just of her son’s pursuit of higher education. In praising her son, Dolores lauds his “physical discipline” as well as his studies and his “compassion for people.” Also, Frank Jr’s “drive to be successful” is highlighted. See sexy modeling photos below. Real Housewives of New Jersey airs Wednesdays at 9pm.

Happy birthday my @frank.catania! We couldn’t be more proud of you from your work ethic when it comes to school, to your physical discipline, but most of all to your compassion for people. Your strong conviction to your religion and your drive to be successful makes me extremely proud of you each day. I love the love you have for your family and I’m so happy you love your second home at @sacredheartuniversity ❤️ I’m looking forward to see all the greatness ahead of you! This pic may be the way the rest of the world sees you, but SWIPE to see what I will always see ❤️ Love mom

Thanks to the very talented @mannequin612 for this shot