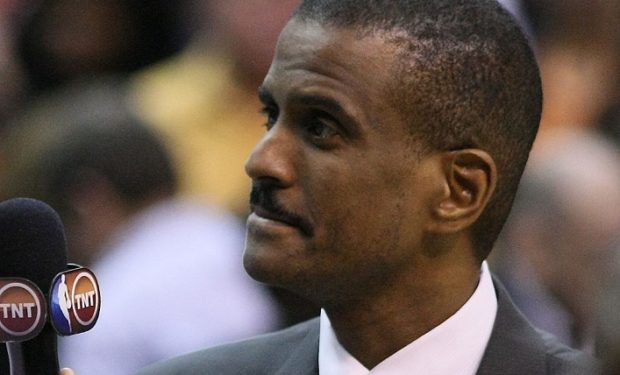 Basketball fans are seeing a lot more of NBA commentator and reporter David Aldridge these days. But longstanding NBA fans have known Aldridge forever — he’s the insider’s insider with a smooth prose and speaking style to match the flow and complexity of the game he covers. We see a lot more of Aldridge nowadays because there’s always a lot more NBA on TV (Aldridge is on TNT, TBS, NBA TV) — with more and more shows dedicated to bringing fans closer to the game. Aldridge is as close as any non-NBA veteran gets. That’s right, the writer of Monday Morning Tip on NBA.com never played basketball at an elite level. Yet he’s been around hoops all his life — hey, Aldridge attended renowned basketball powerhouse DeMatha High School in Maryland. But instead of hoops, Aldridge was captivated early on by words. The eventual combination of words and hoops is a mix that has served Aldridge and his readers/listeners — and 650K followers on Twitter — well.

Speaking with Brent Barry on NBA Soundsystem, Aldridge says he was “very fortunate” to grow up in a place where he was encouraged to read. Aldridge says as a kid he “fell in love with the ability to communicate with people through the written word.” Aldridge met his great subject early, though only peripherally, at DeMatha — where basketball had a major presence. Aldridge worked for the high school paper there, beginning his career in journalism — but he didn’t cover sports. Aldridge didn’t cover sports at American University either, though he worked for the school paper there also. A fortunate connection from American got him hooked up with The Washington Post sports desk and things took off from there — Aldridge was a stringer for the Post starting in his senior year. (A stringer sends back reports from the action, reports that are shaped for publication by writers back at the office.) Aldridge’s first real gig was covering the Baltimore Orioles for the Post and he loved it. Early on he covered the US Open tennis tournament and the Indy 500. Then he covered Georgetown basketball; next up the Washington Bullets (now Wizards). Aldridge became the Post beat reporter for the Bullets at age 24! The rest is history — as Aldridge’s career history has turned out to be virtually synonymous with the latter half of the NBA’s history, even if Aldridge doesn’t dunk a lot or hit many 3-pointers.