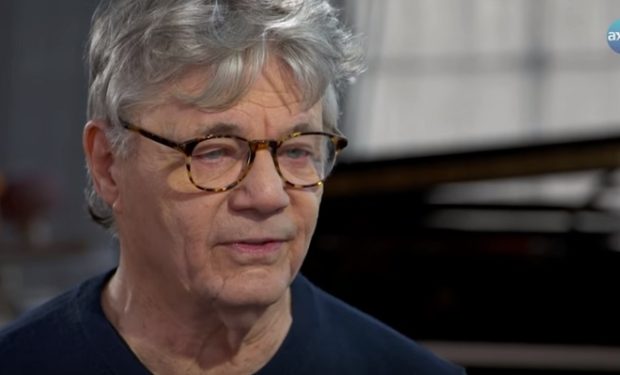 Steve Miller on The Big Interview with Dan Rather (AXS TV, screen capture, video below)

The Steve Miller Band was everywhere in the 70s and 80s, a hit machine practically unrivaled in pop music. The titles still resonate and find new fans, even if Steve Miller himself isn’t going to any lengths to court fame. (Miller, ever the iconoclast, ripped into the Rock and Roll Hall of Fame — right after he was inducted!) Miller has a match for iconoclastic behavior in Dan Rather, the former CBS newsman who has found a home with Mark Cuban’s AXS TV network. Rather uses the platform for a great series called The Big Interview, and he’s a natural at it, even as a seasoned octogenarian. (Rather is 86.)

The Steve Miller interview marks the first of the new season for Rather’s Big Interview program. Miller reveals plenty, and his genial presence contradicts his reputation for orneriness. What’s the “Space Cowboy” about? “Well, that’s a champion of justice, you’re the Space Cowboy,” Miller tells Rather. With more than a bit of Texan in his voice, Rather replies (pleased as punch): “Damned if I’m not.” He repeats it, too — he likes the accolade so much: “Damned if I’m not.” Miller reveals much else too: he always wanted to be an astronaut, which is where the space cowboy theme came from. (“The Space Cowboy’s the guy that stops the bully.”) Rather also asks about the “pompatus of love” — Miller’s famous nonsense coinage in “The Joker” that’s so much fun to sing. (Lewis Carroll and Edward Lear are precursors — think runcible spoon!) But pompatus of love? Miller says he was talking to Paul McCartney in 1969 (when Sir Paul was still a Beatle) about writing lyrics and Paul told him to do “whatever works.” Funny or good, “it’s okay, it’s not that heavy. Things that feel spontaneous have a much longer life,” Miller says he’s learned. Evidence? “Pompatus” has its own Wikipedia page. Rather’s The Big Interview with Steve Miller airs November 14th at 9/8c on AXS TV. Steve Miller Band hits include: Swingtown, Jungle Love, Abracadabra, Fly Like an Eagle, Take the Money and Run, and on and on.