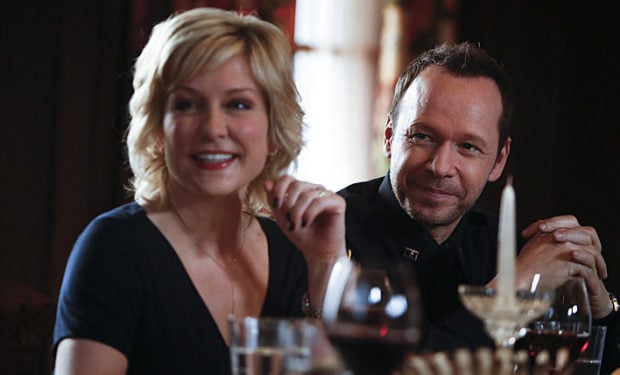 The Season 8 premiere of Blue Bloods, “Cutting Losses,” follows Detective Danny Reagan (Donnie Wahlberg) as he struggles with grief. His wife, nurse Linda Reagan died at the end of the last season — a brutal season for Danny which also saw their house go up in flames. Linda died in a helicopter accident while airlifting a patient from the hospital. Danny still blames himself — for not being home enough — for not spending more time with the family. He puts the ball in motion to retire but his family, including his DA sister Erin (Bridget Moynihan) doesn’t think that’s a good idea. He’s good at what he does and he loves it. Danny probably needs to be on the job for his emotional well-being.

Linda Reagan was portrayed by Amy Carlson, who spent seven seasons as Danny’s wife. She’s known for her roles on the TV shows Law & Order: Trial by Jury (Kelly Gaffney), Peacemakers (Katie Owen), Third Watch (Alex Taylor), and Another World (Josie Watts), and in the films Too Big to Fail (Erin Callan) and Green Lantern (Jessica Jordan), among others. According to imdb, Carlson is working on two films to be released in 2018 including A Bread Factory with Janeane Garofalo and Tyne Daly. Blue Bloods airs Fridays at 10pm on CBS.

[Related: Who Is New Mayor of New York, Margaret Dutton on ‘Blue Bloods’?]

Grateful for fans who have supported me and #BlueBloods Many ‘love you mores’ from me to you🙏 @BlueBloods_CBS @CBS @DonnieWahlberg pic.twitter.com/52ORYLtnTs