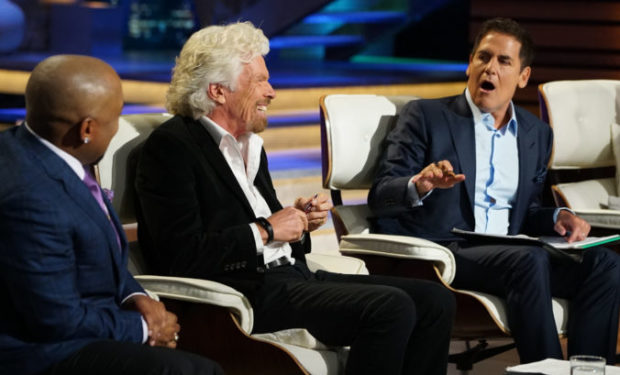 For the Season 9 premiere of Shark Tank, tech billionaire Mark Cuban takes the middle seat on stage. While Kevin “Mr. Wonderful” O’Leary sits this episode out, guest shark Richard Branson of the Virgin empire will join the cast. (Barbara Corcoran is also missing from this episode.) Lori Greiner is present as is Robert Herjavec and Daymond John who sit at the ends of the panel.

ABC teases: “Things get fiery in the Tank when Sir Richard Branson vents his frustration with Mark Cuban in a shocking, never-before-seen way.” Keep in mind: both Branson and Cuban are the only billionaires on the show Branson is reportedly worth about $5B while Cuban is worth $3B. Other guest sharks to appear throughout Season 9 of Shark Tank include: Sara Blakely, founder of Spanx; Bethenny Frankel, Real Housewives of New York City star, founder/CEO of Skinnygirl; Alex Rodriguez, former New York Yankees star, CEO of A-Rod Corporation; and Rohan Oza, branding expert behind Vitaminwater, Smartwater and Bai, which recently sold to Dr. Pepper for $1.7 Billion. Shark Tank airs Sundays at 8pm on ABC, right after The Toy Box.