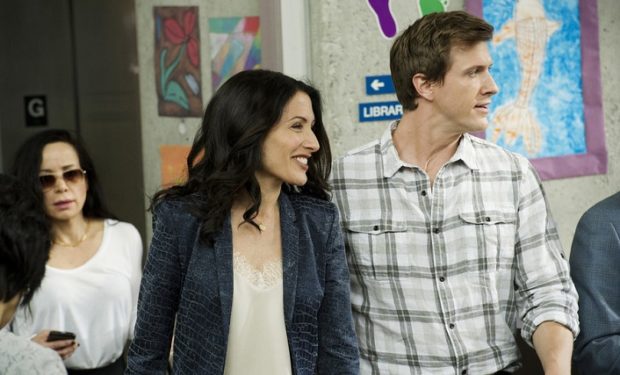 In the Girlfriends’ Guide to Divorce episode “Let It Shine,” while Delia (Necar Zadegan) and Jo (Alanna Ubach) finally confront each other about Albert, Abby (Lisa Edelstein) and her mother clash at the hospital where her father is staying after having a stroke. Abby’s mother tells her her brother Max is on his way from Europe.

Max is portrayed by Patrick Heusinger. He appeared last in the 2015 Girlfriends’ Guide to Divorce episode “Rule #58: Avoid the Douchemobile.” Heusinger is known for his roles on the TV shows Casual (Michael Carr), Royal Pains (Adam Pierce), Gossip Girl (Lord Marcus Beaton), and the films Frances Ha (Patch), The Nanny Diaries (Carter), and most recently Jack Reacher: Never Go Back as The Hunter with Tom Cruise (photos below), among others. Heusinger will appear next in the TV drama Absentia with co-star Stana Katic (Castle). Trailer below. Girlfriends’ Guide to Divorce airs Thursdays at 10pm on Bravo.

Jack Reacher: Never Go Back fan screening in NOLA. Thank you so much to our amazing film crew and the wonderful community of New Orleans for hosting us for five months. Such an incredible time!

Almost one week ago, after four and half months in New Orleans, I wrapped one of the most pleasurable experiences of my career. Completely surreal! #nevergoback

RT and tweet us your thoughts on the OFFICIAL #ABSENTIA TRAILER starring @Stana_Katic & @heusinger! ? (English version, no subtitles) ??? pic.twitter.com/LeVGrRyPLF