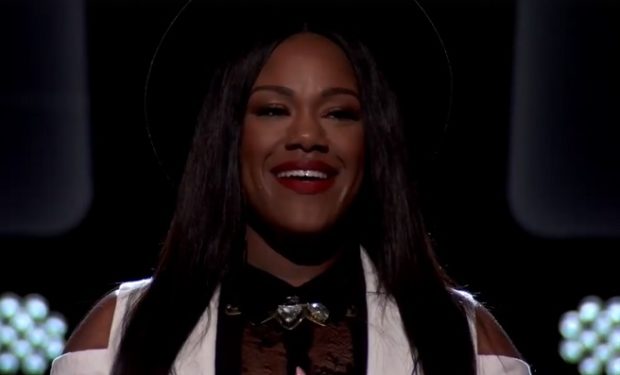 Keisha Renee on The Voice 13 (NBC)

On the second night of The Voice Blind Auditions, Season 13, 30-year-old Keisha Renee from Inglewood, California sings “I Can’t Stop Loving You.” The 1957 country song was written and composed by Don Gibson but when Ray Charles sang the song in 1962, it became a #1 hit.

During Keisha’s performance on The Voice, coach Jennifer Hudson turned to Miley Cyrus and said, “I like her voice.” Well, so did Blake Shelton and Adam Levine. All four coaches turned around. After throwing her notebook on stage (it’s a compliment), JHud told Keisha Renee she wants to help Keisha create her own lane; she doesn’t have to choose one (country, pop, gospel). That’s music to Keisha’s ears. Keisha is currently the opening act on JoJo’s Mad Love Tour, and they’re selling out shows together. See below. The Voice airs Mondays and Tuesdays at 8pm on NBC.