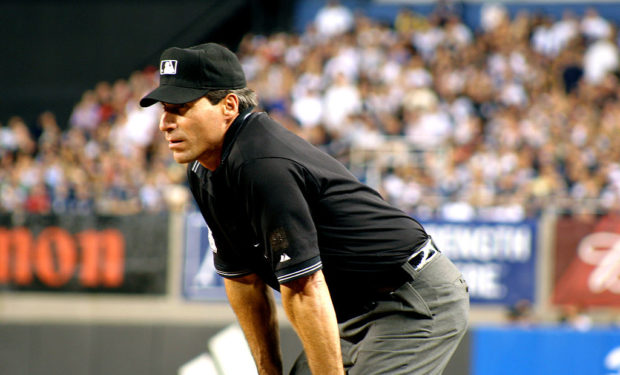 Umpire Angel Hernandez in 2007 (photo by tunnelarmr via Wikimedia Commons)

Umpires in Major League Baseball are usually seen and not heard, but they have something to say about how they’re being treated by the millionaire players whose balls and strikes they call. Here’s the message: Stop giving us a hard time, we’re doing our jobs. To protest what the umps see as increasing disrespect, mistreatment and abuse by the players, the umpires union is lodging a visual protest by wearing white wristbands during games.

It’s not just the players who are meant to get the message either. The umpires union is unhappy with the response to their concerns from the MLB commissioner’s office too. Triggered in particular by a player — Ian Kinsler of the Detroit Tigers — who ripped and ridiculed veteran umpire Angel Hernandez, the white wristband protest organized by the World Umpires Association is asking for help from the commissioner’s office in curtailing the abusive player behavior. The player behavior “denigrates” — to use the umpires’ term — the entire MLB. No suspensions were issued by the league in the Kinsler-Hernandez case (Kinsler was fined) and too little has been done in other similar cases, the way the umps see it. The protest is encapsulated by this line from the official explanation: “The Office of the Commissioner’s lenient treatment to abusive player behavior sends the wrong message to players and managers. It’s ‘open season’ on umpires, and that’s bad for the game.”