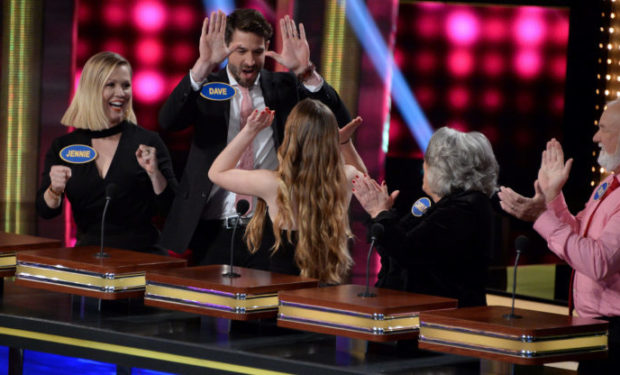 On the August 27 episode of Celebrity Family Feud, host Steve Harvey welcomes two actors and their families to the family game show. Jennie Garth of Beverly Hills, 90210 fame (Kelly) will face former child star Kyle Massey (little brother Cory on That’s So Raven) at the buzzer. On the Garth team is Jennie’s husband of two years Dave Abrams. Garth was married to actor Peter Facinelli (father of her three children) for 12 years, and musician Daniel B. Clark prior to Facinelli, for two years in the mid 1990s.

Dave Abrams is an actor too. He has appeared on episodes of 2 Broke Girls and That ‘70s Show and in TV commercials for big brands including Buick and Taco Bell (see videos below). Celebrity Family Feud airs Sundays at 8pm right before Steve Harvey’s Funderdome which starts at 9pm.