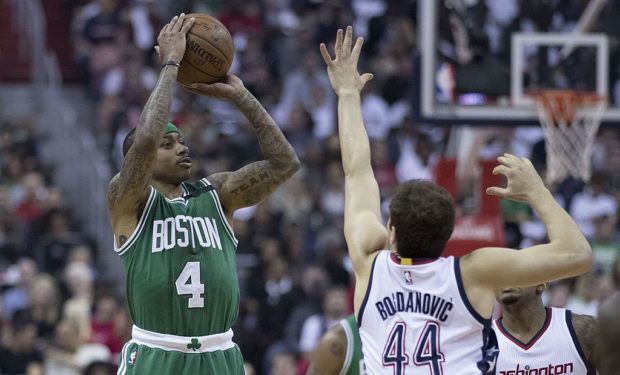 The NBA plays a long season so fans can be forgiven if they need a little time to warm up. But that won’t be the case this year, as the monster point guard trade between Boston and Cleveland puts the dazzle and intrigue into the NBA’s very first TV game. Kyrie Irving will lead the Boston Celtics against Isaiah Thomas and the Cleveland Cavaliers on October 17 at the Quicken Loans Arena in Cleveland at 8pm. It’s on TNT. Sure a guy named LeBron James will be there too, battling against another Celtics newcomer Gordon Hayward. But all eyes will be on the point guards who just switched uniforms.

Irving, of course, loudly requested a trade to get out of Cleveland and the big shadow of James. He wanted to become the leading light elsewhere and he’ll get that opportunity with Boston, where the point guard position (occupied last year by Thomas) was the main scoring position for the Celtics — just what Irving wants. The October 17 game will mean little more than bragging rights during an 82-game schedule that tends to drag through the winter months, seeing star players rested by coaches. The NBA Championship doesn’t begin until June and the Cavaliers and Celtics will be different teams as they gel. But the NBA couldn’t have asked for a better season opener. It was already a game diehard fans wouldn’t want to miss. Now it’s a game the casual fan can’t miss either. NBA commissioner Adam Silver may not love super-teams, but he’s got to love super-trades.