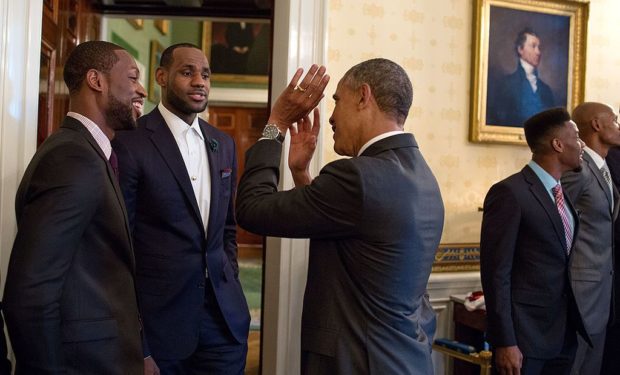 LeBron James hasn’t been shy about taking a stand throughout his career and he went straight at President Trump after Trump’s meager statements on the racist violence in Charlottesville over the weekend. Trump, as even Republican critics will tell you, has so far failed to pinpoint blame on so-called alt-right, or the white nationalists and KKK members whose demonstration in Charlottesville resulted in multiple injuries and one death among protestors. James took to social media to call out the president, who condemned the hatred on “many sides” instead of overtly placing blame on the racist groups. (James: “It’s sad what’s going on in Charlottesville. Is this the direction our country is heading? Make America Great Again huh?! He said that.”) James also retweeted wisdom about love and hate from Barack Obama, with the Obama dialogue including a quote from Nelson Mandela: “For love comes more naturally to the human heart than its opposite.”

It’s sad what’s going on in Charlottesville. Is this the direction our country is heading? Make America Great Again huh?! He said that??‍♂️

“…For love comes more naturally to the human heart than its opposite.” – Nelson Mandela

James speaks his mind in a way that seems to have skipped a generation or two among prominent athletes. James today may be the foremost example of the new breed of zillionaire superstar for whom taking a stand, being part of the larger discussion, is required. After basketball stars like Bill Russell and Kareem Abdul-Jabbar entered the political fray with a social consciousness in the mold of — and in support of Muhammad Ali — a basketball generation symbolized by the great Michael Jordan was more reluctant to rock the boat as salaries and opportunities rose. Jordan’s style was to keep quiet on controversial political subjects and exert his power instead as a moneymaking genius of marketing, becoming among the biggest brands in the world. One can argue that both Russell’s style and Jordan’s accomplishment created the environment and opportunities that James mines — he is a brand nearly on the level of Jordan and, in this social media age, James is less constricted in expressing his opinion on political matters. He’d be ripped, most likely, for his silence, whereas Jordan was usually — though not always — applauded for his above-politics basketball-only focus.

“No one is born hating another person because of the color of his skin or his background or his religion…” pic.twitter.com/InZ58zkoAm