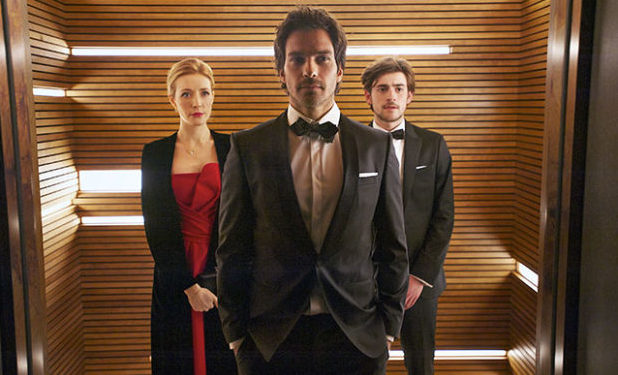 In the CBS drama Salvation is about Liam Cole (Charlie Rowe), an MIT graduate student who tries to stop Samson, an asteroid from colliding with Earth. He has 186 days to complete the mission, and runs to tech billionaire Darius Tanz (Santiago Cabrera) – “a cross between Steve Jobs and Elon Musk” according to creator Elizabeth Kruger – for help. Together they go to the Pentagon and meet official Harris Edwards (Ian Anthony Dale), who btw is secretly in a relationship with Grace Barrows, who is head of public affairs for the Department of Defense.

[Stream the intense Tyrant on Amazon]

Grace is portrayed by Jennifer Finnigan. Finnegan is known for her roles on Tyrant (American wife Molly Al-Fayeed, see link above), Monday Mornings (Dr. Tina Ridgeway), Better with You (Maddie), Close to Home (Annabeth Chase), Committed (Marni Fliss), Crossing Jordan (Dr. Devan Maguire), and The Bold and the Beautiful (Bridget Forrester, the role for which she won 3 Daytime Emmys), among others. Fun facts: Finnegan is married to actor Jonathan Silverman, and they’re expecting their first child. Salvation airs Wednesdays at 9pm on CBS.