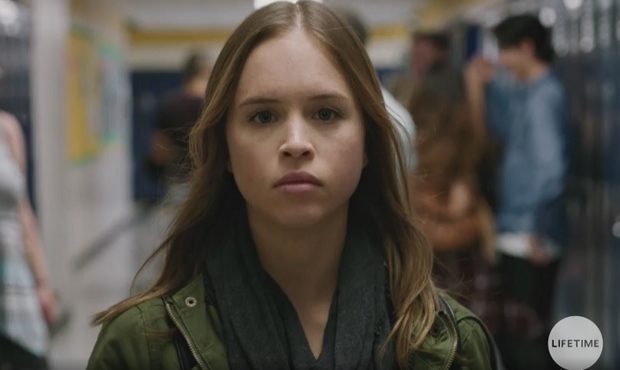 Ryann Shane in 'Story of a Girl' on Lifetime

In the TV movie Story of a Girl, a sex video of 13-year-old Deanna and Tommy (Tyler Johnston) goes viral. Years later, 16-year-old Deanna still struggles with the fallout of the video including the disappointment from her father. Directed by actress Kyra Sedgwick with appearances by her husband Kevin Bacon (who plays the pizza place owner) and daughter Sosie Bacon (Stacy), Story of a Girl is based on the novel of the same title by Sara Zarr.

[pictured: Sara Zarr’s novel Story of a Girl is on Amazon]

Deanna is portrayed by Ryann Shane. She’s known for her roles on Banshee (Deva Hopewell), Lights Out (Daniella Leary), and in the films Frances Ha (crying girl), and Amelia (as young Amelia; Hilary Swank plays older Amelia), among others. Story of a Girl premieres on Lifetime on Sunday, July 23 at 8pm.

#StoryofaGirl out this Sunday night on @lifetimetv