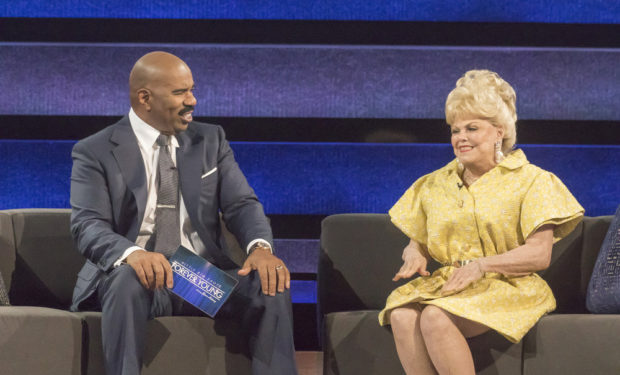 One of the most memorable acts on the Little Big Shots: Forever Young episode “Young at Heart” is 84-year-old burlesque dancer Penny Starr Sr. Miss Penny explains to Harvey, “I’m not a stripper; I’m an exotic dancer.” On stage, she shows Harvey how to “bump the apple, bump the orange, and grind the coffee.” Starr’s accolades include being named Miss Bump-and-Grind of 1963 at the Cotton Club in Atlantic City, New Jersey, and being inducted into the Burlesque Hall of Fame in 2012.

Now her granddaughter, who goes by the name Penny Starr Jr, is following in her grandmother’s fancy footsteps. (Photo below.) Penny Starr Sr and Penny Starr Jr performed together on stage at the Burlesque Hall of Fame 2012 Weekend. For the past 11 years, Penny Starr Jr. has been running the Victory Variety Hour burlesque troupe in Los Angeles. Little Big Shots: Forever Young airs Wednesdays at 8pm on NBC.