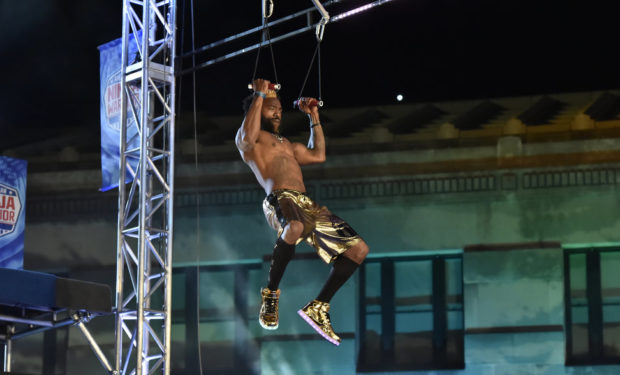 American Ninja Warrior travels to Kansas City, Missouri for a qualifying round (to air July 3). The contestants face six obstacles including the Hang Glider, Broken Pipes and Crank It Up. Devin Harrelson aka Dougie Fresh shows up wearing golden shorts and matching shoes that light up. As Ninja Warriors say on Twitter, “His shoes are lit but his run is on fire.”

[Left: These golden LED shoes are under $35 on Amazon]

Dougie’s fiance Kelly and their son Niall are there to cheer him on, as are a group of Dougie fans in the crowd wearing fake beards. Announcer Matt Iseman says, “He (Dougie) is trying to put on a show for them,” and he does after making it through the Hang Glider. American Ninja Warrior airs Mondays at 8pm on NBC.

His shoes are lit but his run is ?.

Catch the rest of Dougie Fresh Monday at 8/7c on @NBC! pic.twitter.com/Oz4n5XC2Iz