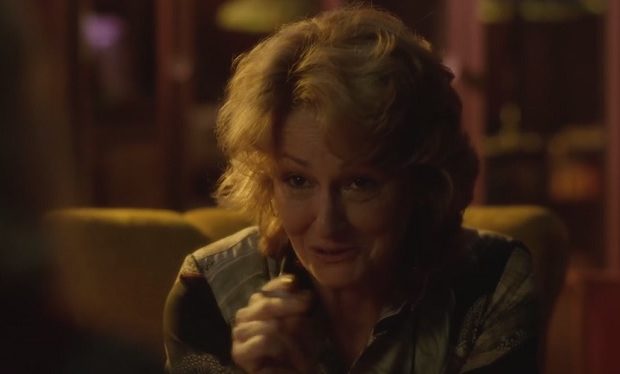 The new Showtime series I’m Dying Up Here is about the brutal L.A. standup comedy scene in the 1970s. Most of it takes place in or around Goldie’s, a comedy club owned by the extremely influential Goldie Herschlag, who’s known not to pay the performing comedians. The series is based on the book of the same title by former L.A. Times reporter William Knoedelseder who wrote about Mitzi Shore, the owner of The Comedy Store, who did not pay comedians until they went on a six-week strike and who then agreed to pay $15 a set. Comedian Jim Carrey is the executive producer.

Goldie Herschlag is portrayed by Melissa Leo. She’s known for her roles on Wayward Pines (Nurse Pam), Treme (Toni Bernette), Homicide: Life on the Street (Kay Howard), and All My Children (Linda Warner), among others. Leo is also recognized for her roles in the films Snowden (Laura Poitras), Oblivion with Tom Cruise (Sally), Prisoners (Holly Jones), and The Fighter (Alice Ward, mother of Mark Wahlberg and Christian Bale) for which she won an Oscar for Best Supporting Actress in 2011. I’m Dying Up Here airs Sundays at 10pm on Showtime.

[Related: Who Plays Johnny Carson on ‘I’m Dying Up Here’?]