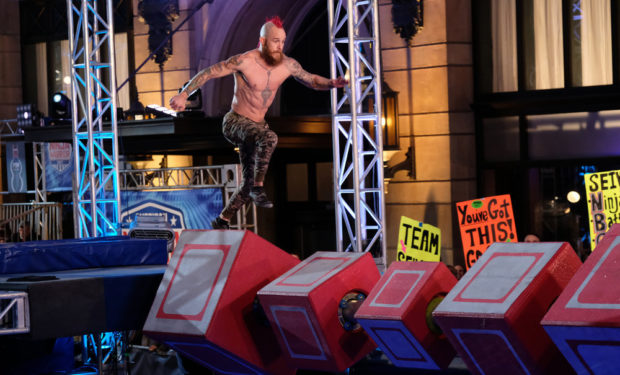 Steve Seiver competed on American Ninja Warrior Season 8 and is returning for Season 9 at the Los Angeles Qualifiers (June 12). He’s the shirtless guy with the red Mohawk and giant Celtic cross necklace tattoo that covers his super-toned torso. The 37-year-old military vet (13 years) is the father of three kids. About six years ago, he went through “a painful divorce” which he says “sent me into an alcohol induced spiral that led to drug use and some very poor, almost fatal, decisions.” He has since made the decision to get sober.

Steve is now dating a woman named Lindsey Bandy, who also has an impressive series of tattoos across her chest and arms. He occasionally shares photos of her on social media (see below). American Ninja Warrior airs Mondays at 8pm on NBC.

Of course I have to dedicate a #WCW to this little lady right here. Are you KIDDING me?!? ??? I’m one lucky dude @lindseybandy Mi AMOR!!!

Yesterday was my last day for at least a few weeks with this amazing girl right here @lindseybandy My gender opposite, my PIC, my best friend that I have been searching for… Hands down the most incredible start to any relationship that has ever been. Fucking serendipitous insanity babe!!! ?